Perry, a five-year-old, was diagnosed with Autism Spectrum Disorder (ASD) at the tender age of two. He started communicating through hand signals during his infancy and had limited verbal interaction with his family. Soon, Perry’s parents noticed a considerable drop in his memory retention and with time, he stopped communicating with them almost completely. 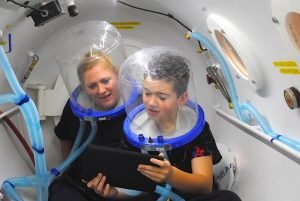 Perry’s doctors suggested the inclusion of B12 supplements in his dietary regimen. This evoked a favorable reaction from the child and prompted his doctors to suggest Hyperbaric Therapy (HBOT) as an adjunctive treatment solution.

Initially, Perry commenced his treatment with an HBOT session. A visible improvement in his verbal communication skills was observed by his parents after he concluded the first session. His parents were ecstatic with the results and invested in a medical-grade hyperbaric chamber at their residence from Ebay.

Thereafter, Perry was administered one consecutive 60-minute HBOT sessions on a daily basis. The physicians claim that Perry was able to form short sentences using multiple words at the conclusion of his 29th HBOT session.

After his 34th session, Perry was known to maintain sustained eye contact during verbal interaction with his parents. These developments are believed to have encouraged Perry’s doctors to incorporate hyperbaric therapy as an intrinsic part of his treatment regimen.

Currently, hyperbaric therapy is being prescribed by doctors for treating Autism Spectrum Disorder through numerous hyperbaric centers spread across the nation.

To understand the efficacy of hyperbaric therapy for Autism treatment, one needs to identify the typical signs that are associated with the disorder. Here are a few factors that provide a better insight into the administration of Hyperbaric Therapy to patients with Autism Spectrum Disorder:

What is Autism Spectrum Disorder?

Autism Spectrum Disorder or ASD is a neurodevelopmental disorder that is known to affect the cognitive abilities and communication of an individual. Medical experts claim that Autism occurs due to hypoxia, a condition wherein certain critical parts of the brain tissues that control basic physiological functions are deprived of oxygen.

Doctors also link this disorder to nutritional deficiencies, toxin poisoning, chemical exposure, and various other reasons. However, these causes are still being debated by the medical fraternity and research efforts are ongoing to discover the exact causes. Impairment of speech, memory, and motor skills are a few common issues faced by autism patients.

The lack of these abilities can lead to:

Early signs of Autism are known to appear in children from the age of two. These anomalies can have a detrimental effect on the daily life of an autistic patient.

However, early implementation of adequate treatment solutions such as hyperbaric therapy are known to provide significant relief whilst treating autism-related complications.

How Is Hyperbaric Therapy Administered To Autistic Patients?

Hyperbaric Therapy or Hyperbaric Oxygen Therapy (HBOT) is a favored alternative treatment solution that has been applied to counter a wide range of ailments since the early 60s’.

In recent years, hyperbaric therapy has been a popular solution that is being recommended and implemented to minimize the symptoms of Autism in a natural manner.

During hyperbaric therapy, the patient is placed in a pressurized compartment known as a hyperbaric chamber. The ambient pressure in the chamber is approximately three times higher than normal atmospheric pressure. Thereon, hyperbaric experts administer unadulterated oxygen to the patient at enhanced pressure levels that can vary from 1.2 ATA to 3.0ATA

This process enables the pure oxygen to instantly dissolve into the body fluids, enabling the enhanced cerebral blood flow to reach the damaged or oxygen-deprived areas of the brain.

The ease of setting up a portable hyperbaric chamber at home has encouraged innumerable autistic individuals to opt for this treatment.

Currently, hyperbaric therapy is increasingly being adopted by autistic individuals like Perry, as a complementary and effective treatment solution. Physicians are known to have observed a marked increase in the cerebral blood flow in Perry’s condition post HBOT.

Oxygen, being a natural healer, is believed to rejuvenate idle or damaged neurons in the brain tissues and aid in the healing process. Researchers have reported significant developments in Perry’s neurological abilities after successive HBOT sessions such as:

With the number of Autism cases escalating around the world, scientists are sparing no efforts in educating the population about the finer aspects of hyperbaric therapy.

The incredible struggle of 5-year-old Perry to beat Autism naturally, with the help of hyperbaric therapy, has inspired millions of autistic individuals to opt for HBOT as part of their treatment regimen immediately.