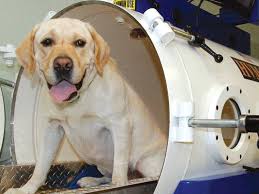 How Does it Work?

The amount of oxygen that red blood cells can carry is limited under normal atmospheric pressure, meaning that only a small amount of oxygen is dissolved back into the plasma. Increasing just the amount of oxygen breathed cannot significantly improve oxygen delivery to the body through hemoglobin, but, with increased pressure, the oxygen level in the plasma increases, which yields higher delivery to tissues and organs. When a family pet is given 100 percent oxygen under pressure, the hemoglobin becomes saturated and the blood itself can also be hyper-oxygenated by dissolving oxygen within the plasma. So, as the pressure of the oxygen is increased in the hyperbaric chamber, the amount of oxygen being inhaled increases; the hemoglobin in the red blood cells becomes 100 percent saturated with oxygen, and the excess oxygen is dissolved into the blood plasma – the fluid of the blood then becoming hyper-oxygenated itself.

The principle goal of the treatment is not only to saturate the hemoglobin to 100 percent but also to dissolve the oxygen into the fluid and protein of the blood, thus allowing the oxygen to be diffused into the peripheral tissues – like the muscles and brain – at increased levels. This also allows oxygen to reach damaged tissues not able to be accessed due to broken-down vessels or hindered circulation because of injury or infection.

At sea level, humans breathe a normal oxygen level of around 20 percent under an atmospheric pressure of 14.7 psi; which is also measured as “ata”, or atmospheric absolute pressure. When you put a dog in a chamber and seal it, the dog is put in a pressure of 14.7 psi to 29.4 psi above atmospheric pressure with 100 percent oxygen. Though therapy differs from case to case, the treatments are on average 45 minutes to one hour, and the chamber is then decompressed by allowing the atmospheric air back into the chamber and removing the excess oxygen

Dr. Léguillette cautions against believing hyperbaric oxygen chamber therapy to be a form of regenerative therapy. “I think when you mention the oxygenation of the peripheral tissues, people jump on saying that if the tissues breathe better they regenerate, but that has simply not been proven,” he said. In humans, however, increasing the oxygen to the plasma can stimulate the growth of new blood vessels in bone or soft tissue, and high oxygen levels have also been shown to increase the ability of the white blood cells to kill bacteria in infected tissues. With the increased pressure, oxygen is dissolved in the plasma and travels even through veins, which ordinarily only carry blood depleted of oxygen. Anaerobic bacteria, or bacteria that do not require oxygen for growth, are killed directly by high levels of oxygen reaching infected tissues. Studies have shown efficacy in treating wounds and tissues that have been deprived of blood with the hyperbaric oxygen chamber therapy, as it reduces oedema and stimulates the immune system.

Hyperbaric oxygen chamber therapy increases the oxygen concentration in all body tissues. Because improved oxygen delivery and stimulation of capillary formation assists in the healing of wounds in skin and muscle tissue, it is especially beneficial in injuries where circulation has been impaired. “The number one application is definitely in the treatment of a deep infection such as an infection to the bone or into the tendon sheath,” said Dr. Léguillette. “These infections are hard to reach with regular treatment and antibiotics. Neurological problems such as brain trauma, head trauma, or nerve trauma can respond well to treatment, and there has been a success in the treatment of “dummy puppies,” where the organs are all functioning, but there are some brain lesions similar to brain hypoxia in infants.”

Due to the chamber’s ability to provide oxygenation to damaged tissues, other benefits include the restoration of blood flow to reduce swelling. By minimizing inflammation and swelling, it can also dramatically minimize the destruction of tissue structures within the hoof in some cases of laminitis. It is also reported to have success in reproduction programs to increase the libido of aging stallions. It is important to note that while hyperbaric oxygen therapy is beneficial in many circumstances, Dr. Léguillette said that it is less common that the treatment is used to enhance recovery from athletic performance, for which there is little evidence yet of effectiveness.

To date, there are many hyperbaric oxygen chambers for animals in the United States. It is at Bar None that Dr. Léguillette conducted his research. There are under 200 chambers in North America, the majority found at rehabilitation clinics. Pressure chambers designed to treat small animals are effective and extremely reasonably priced (the average price point is $12,50 -15,000. “Even universities don’t have the chambers available because people don’t yet see the market for the treatment or the application of the treatment. I think that with the cost of equipment, safety issues and regulations unless studies and research show that it’s a magic bullet, I don’t think it will be a large treatment accessible to the masses.”

The hyperbaric oxygen chamber housed at the facility. Bar None began offering hyperbaric oxygen chamber treatments in 2008 and has seen a surge in business from owners of high-performance horses looking to get a competitive edge. “It’s hard for a lot of people to stomach the cost of the treatment,” said Vanin, “but there are a lot of people taking advantage of it. I’m seeing a lot of use for performance-enhancing treatment and for overall general health, especially with racehorses, barrel horses, and rodeo stock.”

While the majority of his business comes from veterinary referrals, Bar None is willing to accommodate any clients seeking the treatment. He estimates that Bar None will treat on average of 35-40 horses per year with hyperbaric oxygen therapy, with 90 percent of the horses treated being outside patients.

The safety of the horse was Dr. Léguillette’s most pressing concern, due to the fact that much of the hyperbaric oxygen chamber’s equine applications had been based on the findings of human research. This led him to conduct a study with the intent of documenting the possible negative effects of the treatment on equine lung function. “The treatment on the physiology of the horse and the risk to the horse was my first question. I knew that if you have too much pure oxygen, it can be toxic. Free oxygen radicals are released in the body constantly while breathing normally or in exercise, and the body is fighting this with antioxidants. There are so many trends with antioxidants, I questioned the purpose of putting horses into pure oxygen.”

Because oxygen is exchanged in the lungs, they are the organs that are most exposed to the potential side effects of hyperbaric oxygen therapy. It was for this reason that a study of the effects of hyperbaric oxygen therapy on the lungs was the first research project Dr. Léguillette undertook. “We treated horses in collaboration with Bar None, put them into the chamber and looked at the inflammation of the lungs. The good news is that it did not increase the lung inflammation, and if anything it decreased the number of inflammatory cells.”

His first study was undertaken on healthy horses, with the intention being to determine whether or not it could be harmful to the lungs. “When we treated the horses with hyperbaric oxygen therapy, we were looking at whether or not it affected the immunologic response into the lungs. We discovered in healthy horses there wasn’t a really obvious change, perhaps a small effect in the right direction at least. For the next study, we were looking to determine how high the oxygen levels get in the blood, and for how long they stay that way. If you take the horse out of the chamber after 10 days of treatment what are the kinetics? Do you lose the effects? Does the effect of hyper oxygenated blood disappear after an hour? We found that within minutes the blood comes back to normal in terms of oxygen levels. Determining the oxygen levels in the chamber was challenging. Catheters were inserted into the horse’s arteries with a line running through the chamber. Blood was pulled and analyzed every five to 10 minutes. It was a challenging study in terms of logistics.”

Treatment for the Future?

Though its applications appear far-reaching, Dr. Léguillette is quick to acknowledge that hyperbaric oxygen chamber therapy is not a magic cure-all. He believes that traditional treatments will suffice for most ailments, and due to the cost and unavailability of the chambers, it is most realistic to use in conjunction with traditional veterinary medicine. My goal was to contribute to the field because we need to know more about how it works with horses. There are thousands of papers about the human applications of hyperbaric oxygen chamber therapy, but no chambers at veterinary colleges in North America, and very few peer-reviewed papers showing the results of research.”

Dr. Léguillette sees a future for hyperbaric oxygen chamber therapy in more of a rehabilitative than preventative application. He believes cost and availability to be the most positive reason the therapy will take off, and is worried about the unsubstantiated claims of regenerative properties and use in preventative care. “I think it makes sense to use it for anaerobic infections, deep infections, and abscesses.

www.classichyperbarics.com is starting to build a small animal chamber starting in February 2020.

Next article HBOT… LYME… and PEMF